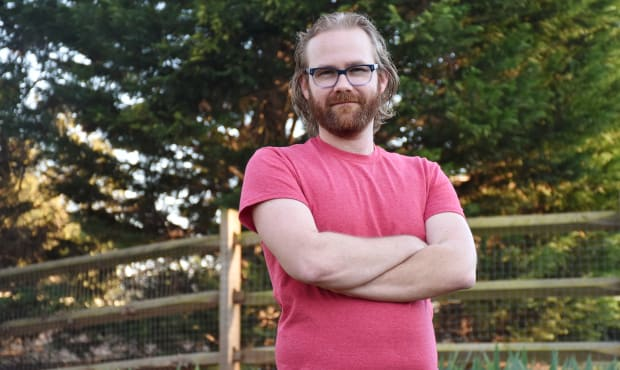 Area dad taking on the rich & powerful to reclaim our planet and our future
Allen Smith is a dad, husband, and modern-day jack of all trades—sometimes a software developer and teacher, sometimes a filmmaker and retail worker, and even once a core team member for a major forensic crime lab. He has spent his entire life learning, growing, and working for a living, all with a singular unwavering mission to help people. He is running for Congress to help us dismantle corrupt systems, empower working people, and save the planet while we’re at it.

Allen grew up in a military family, spending his childhood a few years at a time in cities and towns all across our country. A true middle-class mutt, he is the product of suburban cul-de-sacs, rural countrysides, and all the places in between. His mother was a nurse and his father handled outpatient care services for the United States Army Medical Command. They didn’t have a lot of money, but that helped them appreciate the things they did have even more. Sometimes that meant bike rides around the base or cannonballing into piles of autumn leaves; other times it meant creating makeshift sleds for the hills that led to the grocery-store alleyway behind the house they were living in.

Like a lot of folks, Allen struggled in school, but he worked hard. With the support and advocacy of tireless public school teachers, he earned admission to the University of Texas. He spent his college years studying science, film, and foreign languages, meanwhile working jobs in stock rooms, unloading shipping boxes, and even filming professional wrestlers. He spent two years commuting 90 miles a day for work before finding an opportunity to teach high schoolers about filmmaking in North Carolina. This experience planted the seed that would form Allen’s deeply rooted love of our incredible state and also inspired him to attend graduate school with hopes of becoming a film professor.

It was at Boston University in the fall of 2007 when Allen met the strong, courageous, and kind woman who would soon become his partner in life. Becky and Allen were fast friends and soon inseparable. She was a journalist and photographer from South Carolina, a former college athlete, and a baseball fan who had the grit to root for the Yankees at Fenway Park.

When Allen completed his MFA program in the spring of 2009, he and Becky left Boston and moved to Nashville to pursue work. Loaded down with enormous student loans and unemployed at the height of the worst economic downturn since the Great Depression, Allen took work where he could get it, but often found himself out of a job after standing up to dishonest business owners who were taking advantage of the economic crisis by breaking labor laws and exploiting folks who desperately needed work.

Allen and Becky scraped by, piecing together seasonal jobs, paying for rent and utilities with credit cards, and stretching what minimal groceries they could buy. Times were tough, but hardships are a good test of a person’s character and an opportunity to practice gratefulness. One snowy night near Christmas, Allen sat outside a free legal aid clinic he and Becky had attended for help fighting a former employer who was misclassifying employees and stealing wages. Mud-covered and dented but more galvanized than ever, he made a commitment that night to put his energy into making the world a better place and fighting for all the people who could not fight for themselves.

Despite a lack of any formal training, he’d always had a knack for computers, so he pivoted into the technology industry and really put his shoulder into it. He read lots of books and worked extra hours to hone his skills, eventually earning positions running IT for the Metro Nashville Police Department’s state of the art forensic crime lab and later for the YWCA of Nashville and Middle Tennessee, where he helped manage information and technology for a variety of social programs, including adult education, transitional housing, family literacy, and the largest domestic violence shelter in the state.

In 2015, Allen joined a tech startup called GitHub to help people solve problems by building software together on the largest open-source coding platform in the world. It was also an opportunity to be a part of a company that was challenging old ideas about business management and democratizing their workplace by giving workers flexibility, power, and a voice in decisions. This flexibility allowed him and Becky to make their home in North Carolina, where they could raise their kids close to family. His work at GitHub has given him the opportunity to volunteer for numerous causes and social initiatives, including community events aimed at getting folks with nontraditional backgrounds into coding, and the ConnectHome program, which helps give low-income families affordable broadband access, low-cost devices, and the training to use them.

He campaigned for a seat on the Charlotte Mecklenburg Schools Board of Education in 2017 with a forward-looking platform to tackle the interrelated systemic issues contributing to the opportunity gap between kids of different races and family income levels. The Charlotte Observer Editorial Board applauded Allen’s “thoughtfulness about CMS issues, as well as his desire to find new and innovative ways to bring equity to more schools.” His small, grassroots campaign mobilized more voters from more precincts than any similar school board campaign in the district in recent history.

Armed with a deeper understanding of just how entangled our biggest challenges are, Allen saw a need for better representation and policies in the North Carolina General Assembly. Within a handful of weeks, he expanded his education platform into a comprehensive, state-level plan for putting progress over political games, and then he staged an independent run for North Carolina Senate as an alternative to the establishment candidates from the two big parties.

Allen and Becky currently live in south Charlotte with their two daughters and two rescue dogs. When he’s not fighting to help us save the planet by fixing broken and corrupt systems, you’ll find him playing guitar, enjoying our state’s beautiful parks and green spaces, or bicycling around with his daughters blasting Taylor Swift from their tiny yellow bike trailer.