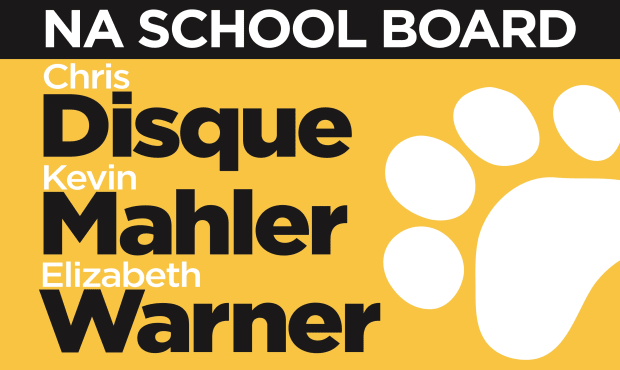 Bipartisan Committee Endorses Three NA School Board Candidates
Bipartisan Voices for NA Kids and Communities is a true bipartisan political committee devoted to finding and supporting the very best candidates, regardless of their political affiliation, for the NA School Board. This encompasses new candidates for the board who will make NA kids and communities a top priority and candidates running for reelection who have a proven track record of working for the best interest of students while safeguarding the financial resources of all of those in the district.

Bipartisan Voices NA is made up of Democrat and Republican members of the communities of McCandless, Franklin Park and Marshall (we hope to add Bradford Woods, as well). Presently, each member serves on volunteer boards and/or committees within the North Allegheny School district. They bring their insights and experience both to those committees and then back to their work on Bipartisan Voices NA. For the 2019 school board election, Bipartisan Voices NA has chosen to endorse three candidates--Chris Disque, Kevin Mahler, and Elizabeth Warner.

Chris Disque is a McCandless resident, the father of 2 kids in the district, and a volunteer coach and Coordinator for North Allegheny Soccer Club. He is an accomplished IT Manager, designing and building systems to help companies produce financial reporting and analytics. He has earned a Bachelor’s degree and an MBA from the University of Pittsburgh. He is currently the Vice President of the NA School Board, as well as the Chair of the Building and Grounds committee, and a member of the Budget and Finance committee (Past Chair). Chris’s commitment to keep class sizes reasonable, embrace technology, champion innovative curricula, improve facilities, all within a strong financial framework has resulted in the district’s highest enrollment in its history.

Kevin Mahler is a 24-year resident of McCandless and father of three. He currently works as a Director for a marketing research consulting firm and as an Adjunct Professor of Marketing at Pitt's Katz School of Business. He has has been a member of the North Allegheny School Board since 2013, serving as Chair of the Education Committee, Vice President, and then President of the Board. Kevin has been a consistent advocate for reasonable class sizes, health and wellness initiatives, fiscal responsibility, improving NA's educational model, and gathering community feedback, as well as improving financial and enrollment projections for better long-range planning. His approach has been validated by rising district enrollment, improvements to district infrastructure, and one of the lowest school tax rates in Allegheny County.

Elizabeth Warner is a mom of four, an engineer, and a volunteer. She has attended over 125 school board meetings and served on a half-dozen district-wide advisory committees and her PTA’s executive board for five years, including terms as President and Treasurer. Elizabeth holds engineering degrees from Carnegie Mellon and Johns Hopkins and worked as an Air Quality Engineer for 7 years until her third child was born. Her knowledge of NA and her strong analytical skills are well suited to keeping our school district first-rate at a reasonable cost to taxpayers.

Bipartisan Voices NA is funded entirely by personal contributions. If you are interested in the goals described above, your voluntary contribution will help to support our bipartisan voice by funding campaign signs and literature and covering mailing and other various campaign costs.