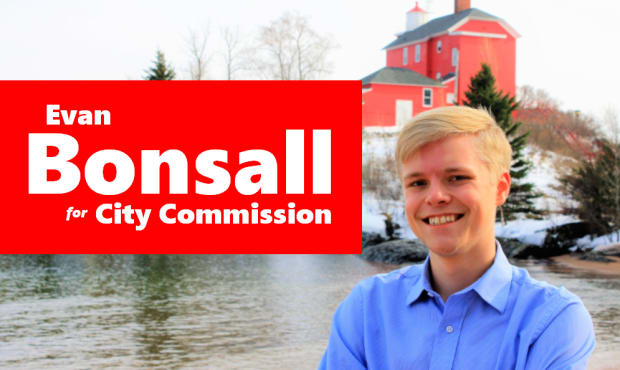 Evan Bonsall: New Leadership for Marquette
Marquette is my hometown. I was born and raised here in Marquette, attending Marquette Area Public Schools and graduating with the Marquette Senior High School Class of 2015. My dad, Steve, worked in law enforcement for 25 years – his father worked at the Tilden Mine, and was killed in an accident. My mom, Yvonne, grew up poor on a farm and lived in foster care for a while as a child, and now she works as a secretary and was a union vice president at the Marquette Police Department. She never set foot on a college campus, but her dream was that her kids would get the education she never had.

When I was growing up, my family often struggled to make ends meet. When my parents got divorced when I was 14, we were forced to sell our home on Woodland Avenue. With the cost of living as high as it is, my mom, my brother, and I have moved four times since then to save money. I didn’t have it as hard as my mom had it when she was a kid, or as hard as many of my friends from school did, but the next few years were a tough time for me and my family.

But I worked hard in school, and I had wonderful teachers, and great mentors in former State Rep. John Kivela and former Mayor Tom Baldini. With their help and encouragement, I was admitted to Harvard on a full-ride scholarship based on my family’s financial need. I have studied there for the past four years, and will graduate this spring with a B.A. in Government with minors in History and Spanish.

I’m running for the Marquette City Commission in 2019 because I plan on living in Marquette for the rest of my life, and I want to help make sure that our town remains a great place to live, work, and raise a family for many years to come. I'm sure that you can tell from the pictures above that I'm a little younger than your average City Commissioner - if elected, I'd be the only Commissioner under the age of 30.

However, I am running now because I am convinced that the decisions we make as a city in the next 5 years will impact Marquette's future for the next 50 years, and my generation will have to live with the consequences of those decisions for the rest of our lives. A majority of Marquette residents are in their twenties and thirties, and this new generation deserves a seat at the table as we discuss Marquette's future.

Young people and working families want to stay in Marquette, but rising housing costs and a lack of economic opportunity are increasingly forcing people like me, including many of my friends and family, to move out of the City or leave the U.P. entirely just to make ends meet. This doesn't just erode our local tax base - if left unchecked, it will drain our community of its economic and social vitality. We need to make sure that Marquette can grow without sacrificing the unique qualities - our public lakeshore, trails and parks, forestlands, our downtown, and an affordable cost of living - that make people want to live here in the first place. And our local government has a vital role to play in that effort.