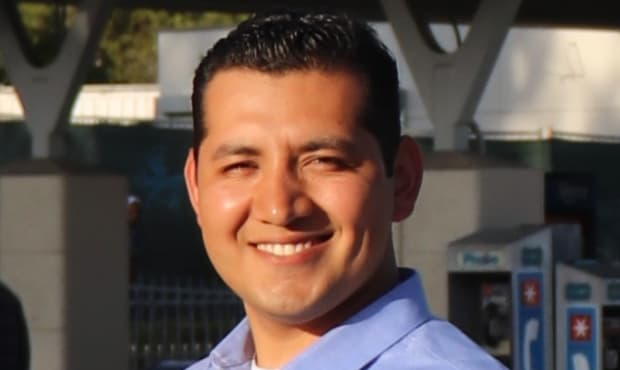 Working Class San Diegan Fighting for Real Progress & Socioeconomic Justice
As a native working-class San Diegan, first generation Mexican American, and son of undocumented immigrant parents, I am exploring a run for Congress to represent California's 53rd Congressional District in 2020. I am the first in my family to graduate high school, first and only to go to college, and even graduate school. I have always given my all to everything I do, and if I jump into this race, I will speak truth to power, and work even harder to fight for our communities so that our District finally has the real progressive representation it deserves and desperately needs in Washington, DC.

Growing up in a large low-income household was tough, and my father worked hard to provide for us. Money was tight and we moved often as rents increased, from Golden Hill to Sherman Heights and finally to City Heights. When I was 10, my father was arrested and deported. While he was being held, and his immigration case was being figured out, my mother struggled to find a job and we lost our apartment. We spent several months living with relatives and friends, from one garage or living room to another. When I was 10, some of my brothers and I even ended up at a children’s temporary emergency shelter as my mother could not provide care. When we were returned, we moved to central Mexico where my brothers and I worked selling bread with a basket over our heads for two months before reuniting with my father in Tijuana. I learned at a young age the true meaning of work and that, in order to make it, I needed to prove myself to get another day of work and help at home.

I returned to San Diego at age 15 to work, rent a room, and attend Crawford High. This is where I first got interested in politics after seeing how the funding and resources my school lacked were determined by a zip code. I went from wanting to be a civil engineer to build bridges, to wanting to fix our broken public education system and build different kinds of bridges. At 18 I enrolled at San Diego City College to study political science and became a social justice activist and community organizer to advocate for progressive issues. At age 20, I moved to a studio and assumed full custody and responsibility of my two youngest siblings for them to go to high school, while I held two jobs and studied full time.

Despite all odds, I got ahead, and once my brothers finished high school, I transferred and got my political science bachelor’s degree from UC Davis. I moved to Washington, DC to intern in President Obama’s administration and helped small and medium sized business reach foreign markets and include them in the policy development process while focusing on issues to improve labor and environmental standards. I worked and immersed myself in the public policy circles and saw first-hand how the federal legislative process works. Shortly after Trump's term began, I decided it was time to return to school and get back to community organizing and activate constituencies. I moved to Chicago for graduate studies in public policy and administration at Northwestern University to better understand how policy is developed and implemented. This location allowed me to serve Obama’s former campaign team at Organizing for Action (OFA) to help train new organizers in underrepresented communities of Chicago to provide guidance, mentoring and necessary tools to advocate for progressive causes directly impacting their lives.

Economically, our District's families are swimming against the waves, and nothing has changed in the last two decades. While the cost of living is rising, real wages remain stagnant. We are facing a housing crisis and, with higher rents, middle and low-income communities are getting crammed up, with multiple families having to make the tough decisions of paying for food or rent, resulting in families sharing already small apartments and houses with other relatives or friends. Our K-12 public education system funding is determined by zip codes, with the more affluent ones enjoying higher benefits. College costs are skyrocketing, and graduates are buried in student loan debt. Immigrants continue to be unfairly deported, and families continue to be separated as happened to mine. On top of that, children are now being targeted, sent to detention centers, thrown into cages and getting abused. The current political climate, perpetuated by Donald Trump since his presidential candidacy announcement, has divided our communities, pitting us against each other through a politics of fear and hate instead of addressing the most pertinent problems affecting our country.

Our communities have always gotten the short end of the stick, and I’ve experienced it first-hand all my life. It doesn’t help that we have a Congressional representative who is knee-deep in corporate money, addressing their concerns first instead of the people’s.

MY COMMITMENT TO YOU:

When I join this race, I commit to stand up for the disadvantaged and underrepresented communities that are home to our families, friends and loved ones. I commit to use the strong work ethic that I developed at a young age to fight inequality, the powerful interest groups in Washington, and take no money from corporations or corporate PACs. Your support and donation pledge are essential to the grassroots movement we are building for our communities to have a chance at a better future. We all deserve to thrive. We cannot let our future generations face the same challenges of today. We must kick special interests to the curb and focus on putting people first!

As someone from the community who has lived through and been affected by every tragedy caused by ineffective and unfair policies, and who has endured and achieved so much even when told that it was not possible, I am best prepared to fight for all of us so that we can ALL make it.

With your help and backing of our community, I am ready and prepared to fight on all fronts:

Focus on job creation and training in new technologies, emerging industries and green jobs for workers to keep up with advancements and changes. One job should be enough. We must protect our unions, strengthen workers’ labor rights, and raise the minimum wage to $15/hr. Ensure equal pay for women. Stop protectionist trade policies like high tariffs that end up being paid by consumers and hinder our economy instead.

Your zip code should not determine the quality of education you receive. I will fight to make equitable education from K-12 a priority with better funding and just wages for teachers, to make public colleges and universities tuition free, and forgive student loan debt.

Immigrants should not be treated differently than citizens. I will fight to ensure a pathway to citizenship and work permits for undocumented immigrants and DACA students, who are and always have been crucial pillars for America’s growth and well-being. They are our fathers, mothers, siblings and neighbors. I will fight to reestablish the Temporary Protected Status program, stop ICE, CBP and the unfair separation of families, shut down the inhumane detention centers and camps of children, and end public funding for all private companies banking on this.

Housing is a human right, and a government for the people must ensure affordable housing so that everyone is able to afford a decent place to live without having to spend all their income on rent and bills.

Healthcare is a right. Every developed nation has a government-run universal healthcare system. It is time for the richest economy in the world to catch up and cover every American through one single-payer public federal insurance program that offers comprehensive coverage, with equal access to all medical services and treatments and the freedom to choose your own doctor. This program shall be free at the point of service with no premiums, no copays or deductibles, and no additional fees. It will be a system paid through tax contributions based on the ability to pay, combined with a jobs and severance guarantee to cover those affected by the transition.

Our prisons are overcrowded, and private prisons are banking on this, enabled by a systemic failure of our criminal justice system and policies that place a higher and disproportionate amount of black and brown people behind bars. It is no secret that most felons come from disadvantaged and underrepresented communities of color due to our systematically flawed racist criminal justice system. We need a system that operates fairly and equitably. We should close private prisons, reduce the population of jailed, detained, and incarcerated juveniles and adults, and train and monitor our police forces to end unfair treatment and killings of black and brown people.

We cannot have criminal justice reform without letting felons vote. They are fathers, mothers, sons, and daughters, and they should have a say in how policy affects their families and their future, just like the rest of us. Not letting felons vote has been one of many disgraceful voter suppression tactics. Without this, we are letting the rich and powerful enjoy higher voter turnout. We need to do all we can to help them rejoin society successfully, become productive members of our communities, and participate in the political process instead of sealing their fate in a life-cycle that keeps them going in and out of prison. I pledge to fight for felons to be allowed to vote because it is their right and their voices do matter. It is time to stop disenfranchising our most vulnerable communities.

I WILL CONTINUE TO FIGHT FOR:

Our time on Earth is precious, and we need to make sure that our actions today are also focused on building a sustainable future for our future generations to enjoy the planet. Therefore, it is imperative that we work toward the goals outlined in the Green New Deal. It is a road map to revamp our economy by focusing on renewable energies and creating green jobs for the workforce to succeed in an ever-changing labor market, all while preserving the environment.

Ensure that women, the LGTBQ+ community, and people of color have the same rights as everyone else, free from discrimination. We must defend Roe v. Wade, defend reproductive rights, and stop suppressing voters. Opportunity for advancement should not be hindered for certain people just because we have differences. We should all be able to enjoy a life with equal rights, freedom of expression and association with any group and/or religion, without discrimination at schools, workplaces or anywhere.

Our elections have been rigged time and time again by the gerrymandering of districts across the country, and voting rights are under attack nationwide through voter suppression laws and tactics like gerrymandering. They are intentional efforts to disadvantage voters and keep the rich and powerful in office, violating our constitutional right to choose our own representatives. If we are going to succeed as a democracy and have a fighting chance to address all the issues above, we need to level the playing field by protecting our voters, stopping partisan gerrymandering, and creating fair congressional districts.