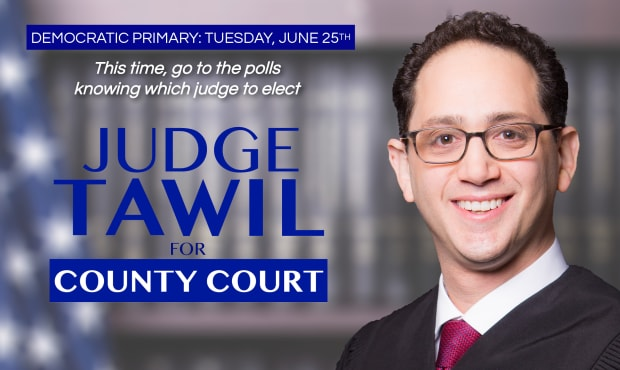 Judge Michael Tawil for County Court 2019
JUDGE MICHAEL TAWIL is committed to the fair and impartial administration of justice. His judicial philosophy calls for all litigants to be treated with respect and dignity and have a full and fair opportunity to be heard and have their case considered fully on the merits.

Currently, he is an elected Town Justice in Ossining, one of the busiest town courts in the State of New York. As Town Justice, Judge Tawil has unlimited jurisdiction over misdemeanor criminal cases, summary proceedings (landlord/tenant cases), limited jurisdiction over civil actions and felony criminal cases, occurring within the Town of Ossining. In this capacity, Judge Tawil has presided over a thousand criminal and civil matters during his tenure.

Judge Tawil is for effective and equal access to justice for all in Westchester County, especially our vulnerable populations. With an unblemished record of ethical conduct, he is a firm believer in judicial independence and accountability. He values reforms for discovery and bail as the initial steps to criminal justice reform at-large.

As a former Ossining Town Councilman, Judge Tawil has overseen public policy, daily functioning of all aspects of the Town of Ossining and its employees, drafting and passing of town budgets and town laws, including zoning, environmental and public safety ordinances.

Also a former member of the Town of Ossining Zoning Board of Appeals, he interpreted Town of Ossining zoning code and maps and oversaw requests for zoning variances and permits. Prior to that, he was a small claims arbitrator for the New York City civil courts.

His career includes 27 years as a courtroom trial lawyer, in the New York State Supreme Court, appellate and federal courts, and as a litigator on complex personal injury, medical and nursing malpractice cases through his private practice as the founder of The Law Offices of Michael Tawil, P.C., based in White Plains.

Judge Tawil is married to Jennifer Fields-Tawil, a district office manager to Assemblywoman Sandy Galef. They live in Ossining with their two children who attend Ossining public schools.