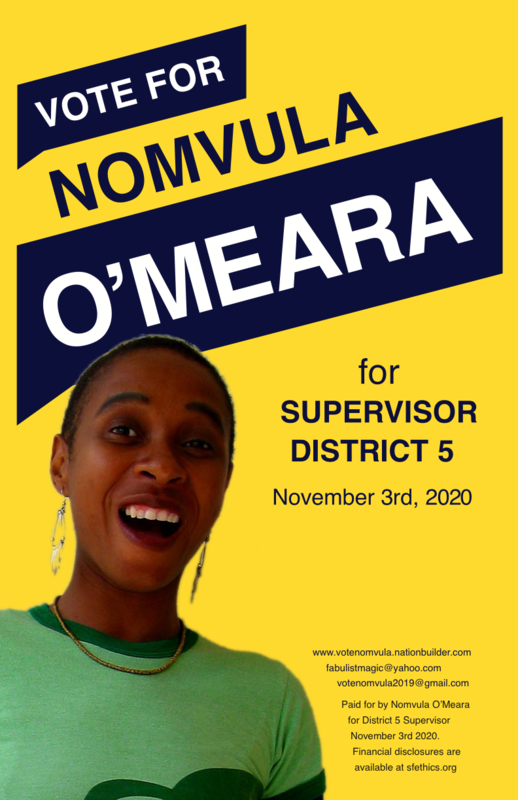 Nomvula O’Meara - District 5 Supervisor for Black Lives
WHY I’M RUNNING & WHO I AM:

Above all else, I’m a single mom of 3 beautiful black children. I’m an immigrant. I’m an activist for black & queer lives.
I’ve survived & overcome homelessness, & I’ve learned to thrive as a mother of not just my own children, but those of my community.
This is a grassroots, people-powered campaign. No big dollar donations. No corporate support. 100% Grassroots.
——————————————————
Our Black Agenda in San Francisco Fights for:
1. A “Black New Deal”
2. Demilitarization & Defunding Abusive Police Programs
3. Science & Education = A Public Health Priority
4. Deeply Affordable Housing as a Right, Not a Privilege
——————————————————
Our fight FOR our lives is so much bigger & more important than anything that we’re fighting AGAINST. I will never lose sight of that fact. How we fight for our lives is no less important than the goals we set to achieve.
My children — OUR CHILDREN — deserve a future that centers and empowers our beautiful black babies. This is a fight against corruption & FOR quality education, FOR deeply affordable & equitable housing, and FOR a world free of police & political violence.
What better example can I set for my children than to show them exactly how to fight (win or lose) for our lives? I’m teaching my children that winning is just as much about how I fight for black power as it is about whether or not I win this particular office. Please join me in this fight for ALL of our children, for their black lives, and for a black agenda that centers just THEM. If not now, when?
——————————————————
Our Black Agenda For A Better, Blacker San Francisco:
1. A “Black New Deal”
——————————————————
Create a Black New Deal by investing in Black Communities in the city and stymie the federal government need to prevent the red lining of Black and Brown communities. This must be an expansion of an equitable “Green New Deal” with explicit components that address the impact of a challenging and ever changing environment on a global scale, particularly center struggles experienced disproportionately by people of color.
——————————————————
2. Demilitarize & Redirect Abusive Police Funding
——————————————————
Defund the police by stripping away Qualified Immunity and redirect the money to retrain them to respond more sensitively to black and brown communities and people of color.
——————————————————
3. Science & Education = A Public Health Priority
——————————————————
Equity in the Times of a Real Pandemic = survival for black and vulnerable San Franciscans. We must fight to dramatically increase funding to our schools in order to create a future without debt for students hungry to learn & build a healthier future. Today, San Franciscans and Californians face COVID-19. We must prioritize public health & science now more than ever by elevating & centering our to keep our most vulnerable families, children, LGBTQ+ homeless families and youth, & those struggling with trauma & their own mental health.
——————————————————
4. Deeply Affordable Housing as a Right, Not a Privilege
——————————————————
I urge you to support AB (Assembly Bill) 1436, a measure that would protect renters up to 15 months after the health emergency has lifted. We must also fight with all of our power to repeal Costa Hawkins & allow rent control & equity state-wide.
Housing must be a human right. We’ll radically challenge land use & development processes to center affordable and equitable housing solutions and public space. We MUST utilize available land, bring back families who have been displaced, and build new low income and affordable housing by converting existing sites into affordable, habitable homes, and taking as much housing out of a capitalist, white-centered market.
——————————————————
My Children & How We Arrived Here in SF:
——————————————————
My beautiful children were born and raised in San Francisco. Their lives, centered in our “Lower-Hate” community, thrived not far from the Fillmore edition from which so many of our brothers and sisters were cruelly displaced.
I came to the United States in the pursuit of a dream and happiness for a better life, and I found a country full of possibilities and contradictions. My journey from Africa into a biracial marriage brought me immense meaning, and, later, immense pain. Tragedy struck after leaving my husband, losing my job, and leaving myself and my children without a home.
——————————————————
Experiencing Homelessness Should NOT Ever Be a Thing. PERIOD.
——————————————————
It took one year, with the help of non-profits and city resources in order to ultimately find a lovely home in the Lower Haight where we’ve lived for the past 10 years. I was a single mom, naturalized in the U.S. from South Africa. Acclimating to a system that I had only hoped for to be a dream, had its bumps, it’s nightmares, and it’s successes, but we made it work as a family.
I’m deeply proud and invested in this city, but I know full well that American Dreams turn into American Nightmares if we don’t fight against corruption & the ills of society. ——————————————————
A Better, Blacker Future:
——————————————————
Black is beautiful, no matter what they say. I’m not just fighting corruption. I’m fighting for a better future in which EVERYONE internalizes this instead of the toxic representations of our lives that are internalized navy police, policy makers, and those who don’t value us.

I’m proud to say that my oldest has graduated with a degree in Computer Science and Pre-Law at Oberlin College and it is my hope that he’ll have no barriers in his life, but the reality is that no matter your privilege, being black in America is requires resilience, pride, and support, particularly when we see ourselves abused so regularly in media and every last police brutality incident we come across.

My 2 younger boys are fighting thriving their way through school here in San Francisco. Being their mother is the most important job I’ll ever have, but being the mother I know they’ll be proud of, who fights for their lives, requires truly harnessing the power that I have in order to fight for ALL of our children.
——————————————————
My Political History
——————————————————
I ran for DCCC (The San Francisco Democratic Party), with this goal of truly fighting for a better future for our children in mind. In that race, I received endorsements from the SF Bernicrats, League of Pissed Off Voters, Bernal Heights Democratic Club, D.A. Chesa Boudin, and Dean Preston (current District 5 Supervisor), as well as former District 5 Supervisor, Harry Britt.
As a first time candidate, I gathered close to 19K voters having run as an independent with a budget of less than $2000, and it happened because this race wasn’t about me. It was about our volunteers, our families, and our fight for our future. I want to continue that fight!
I am a card-carrying Democratic Socialist & an organizer and activist for ACCE (Alliance for Californians and Community Empowerment), a statewide organization helping tenants avoid eviction. I am a union activist, organizer, and member of Local 2 Unite Here! As an organizer of Local 2, I fought for the equity and representation of black women and women of color to guarantee equitable job opportunities by organizing them and signing petitions that I presented to the union.