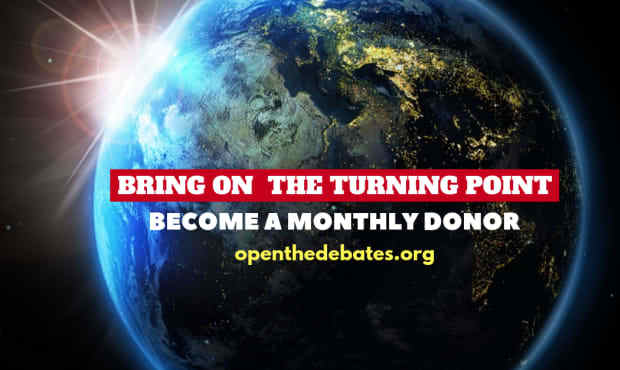 Bring on the Turning Point! Be a monthly donor.
Everyone agrees that the political system is broken.

But as the crises we face continue to mount, and the two major parties dig in their heels to protect their power, our society is nearing a breaking point.

The critical challenges we face can only be solved by coming together across standard political and social divides and getting down to the business of collaborative problem-solving in the interests of We, the People. From climate change to the national debt, we cannot afford to kick the can any further down the road.

The good news is that there is an emerging cross-partisan movement that is uniting across the political spectrum to address the root causes of our political dysfunction. We have an unprecedented opportunity to turn this breaking point into a turning point for transformational political change.

While there’s no one silver bullet, opening up the political debates to new ideas, fresh voices, and better choices is a critical and urgent part of the solution. Open the Debates is building a national, grassroots force that will shine a bright light on the issue of exclusionary debates.

We will:
We will partner with the growing political reform movement as the only national group focused on grassroots organizing to open debates at all levels.

Your recurring gift is an investment in building an unstoppable grassroots movement that will force open the political debates of our nation from coast to coast. Let's turn the tide!

$5 - Skip a fancy coffee and help turn the tide towards transformational political change.