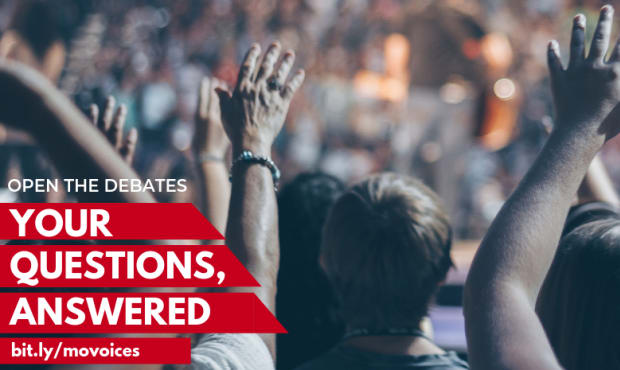 We want to answer your questions about this project. Here are some of the common questions we receive. Send us an email (info@openthedebates.org) if you have any questions not addressed here.

Where is the campaign page?
Visit https://secure.democracyengine.com/openthedebates

Who are you?
We are a small group of citizens across the political spectrum who felt marginalized by exclusionary debates and have been using social media since 2012 to challenge the duopoly control of these important public interest forums.

We each had petitions on Change.org that were gaining traction, but we decided to pool together our efforts to create a unified, non-partisan and cross-partisan voice, and have been coordinating ever since as Open the Debates, without spending a dime... until NOW.

Where will my money go?
This is a seed funding round to cover start-up costs (legal, technical, and administrative) and the initial three months of operations of Open the Debates. If we don't hit our $30,000 overall target ($10k from crowdfunding, $20k from major gifts) we will advance this project on a part-time basis.

Your gift is an investment in building a grassroots, national, cross-partisan movement to force open the political debates of our nation at every level of government.

How will you do it?
We will focus our efforts strategically, on the highest leverage moments with a credible chance of concretely advancing the cause of robust, open debates.

We will organize around local, state, and national debate exclusions, carrying out pressure campaigns through petitions, media spokespeople, op-eds, letters to the editor, influencer endorsements, explainer videos, “bird-dogging” candidates early in the process, protests, sit-ins, sponsor boycotts, publicity stunts, and exposing and shaming decision makers who are working to keep independent voices out of the conversation.

We know we can win locally and build momentum for taking on the presidential debates controlled by the Democrats and Republicans.

We will shine a bright light on the fundamental and widely-held principles that:
We will collaborate with the truly nonpartisan groups working on voter education, voter engagement, and electoral reform to build inclusive election narratives.

We will form strategic media partnerships. We will expose the partisans for what they are and create the conditions for political transformation.

What's the problem you are addressing?
For too long, the Democrats and Republicans have worked together to protect their grip on our political system. Over many decades, they have built up a fortress of systematic advantages that shuts out independent competition and limits the political discourse to false binary choices.

Record numbers of US voters now believe we need a third major party, and far more Americans identify as independent (39%) than either political party (31% Democrat, 28% Republican). But the two-party duopoly and their associated political industrial complex works diligently behind the scenes to control the narrative and thwart any would-be competition.

One of the most insidious ways the two parties block new voices and choices is through exclusionary political debates.

Starting with the bipartisan launch of the private Commission on Presidential Debates in 1987, the Democrats and Republicans have worked to keep independent and third party candidates out of presidential debates, with Ross Perot’s 1992 campaign being the one exception. At the local level, Democratic and Republican candidates routinely compel debate hosts and sponsors to invite only candidates from the two major parties, and the media plays along.

Voters don’t even know this is happening.

The good news is that the arguments in favor of closed debates are weak and unpopular. In fact, 3 out of 4 of voters think debates should be open to all ballot-qualified candidates.

Don't we live in a two-party system? Isn't this a futile undertaking?
The fact is that we live in a two party duopoly, not a "two party system". The major parties work in concert with each other to squash any outside competition by rigging the game in their favor. They act exactly like a standard business duopoly, according to the leading expert on business competition. The rules of the game can be changed, and citizens are working across the country to improve the system. But it will take long-term organizing and a fierce commitment to putting principled reforms ahead of short-term partisan gains. And this is an urgent undertaking that can not be put off until some fictionalized lower-stakes election in the future.

Are there ways for me to get involved beyond donating?
Absolutely! We won't succeed without a strong, organized, grassroots movement. Visit openthedebates.org for some simple ways to get plugged in!

Can I make a recurring gift?
Not at this time.

Can I donate by check?
Yes, please send checks payable to "Mediators Foundation", with "Open the Debates" in the memo section, to: