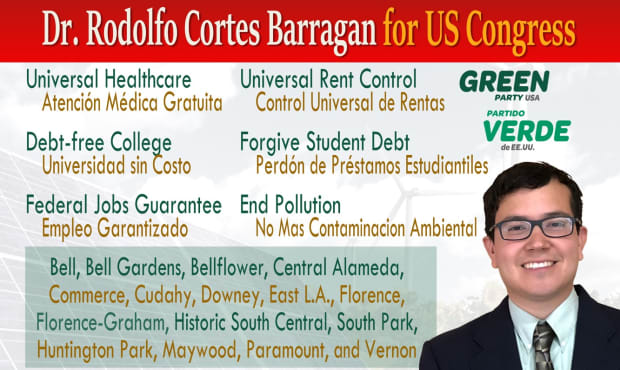 Toward a New Society
Rodolfo is a first-generation immigrant to the United States. He graduated from UC Berkeley and Stanford with his Ph.D. He is a socialist, Green Party progressive candidate. He aims to remove his longtime Congressional Representative, who refuses to fight for his community and who has taken money from all the worst corporations - Chevron, GEO Group, Lockheed Martin, and Walmart.

It's time to terminate economic predation. It's time to promote the general welfare. It's time for guaranteed housing, education, jobs, food, and so much more. We need a bold new direction for East and Southeast Los Angeles, as well as for the human species more generally.

Neither the Democrats nor the Republicans are capable of pushing for the kind of change that we need. We must break the two-party system if we are to save ourselves and our posterity from the deadly effects of the corporate state.