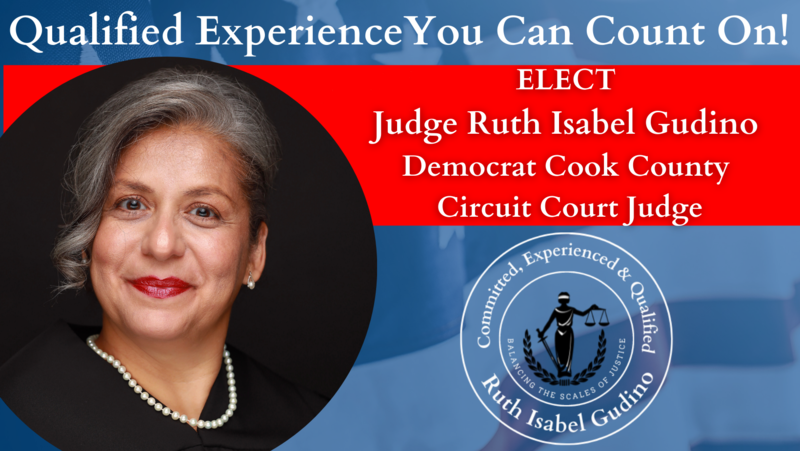 Ruth Isabel Gudino for Cook County Circuit Judge
Ruth I. Gudino is a first-generation lawyer with twenty-six (26) years of experience and has dedicated her entire career to Public Service. Her legal career began with the Office of the Public Guardian of Cook County as an Assistant Public Guardian. During her time at the Guardians Office, she served in the dual role of the child’s attorney and guardian ad litem. The Cook County State’s Attorney’s Office recruited Ruth in March of 1997 as an Assistant State’s Attorney. Initially, she was assigned to the Public Interest Bureau, Child Support Division, and continued her career with the Office until November 2001. She was assigned to the Juvenile Justice Bureau, Misdemeanor – 4th District Maywood, and Felony Review Unit.

Ruth transitioned to the United Auto Workers (UAW) Legal Service Plan in November 2001. During her time with the UAW, she provided legal services for the UAW employees for General Motors and Ford Plants in Cook County.

Ruth returned to the Cook County State’s Attorney’s Office, March of 2003, where she continued her prosecutorial career through various assignments, Felony Review, Preliminary Hearing and Grand Jury, and the Felony Trial Division. She was the first female Hispanic Career Prosecutor to be named the Director of Legal Hiring and Recruitment for the Office. Over her 22 years prosecutorial career, she tried 60 juries, 35 of which she was lead counsel. Most recently, Ruth served in a supervisory capacity in the Juvenile Justice Bureau and the Criminal Prosecutions Bureau in the 5th District –Bridgeview and most recently as the District Supervisor in the 4th District -Maywood.

Outside of her legal work, Ruth has also volunteered and been appointed to various boards and associations. Since 1995, she has served on many different boards and organizations, including board member for the Chicago Abused Women Coalition and Healthcare Alternative Systems and Kaleidoscope. She was appointed by then-Chief Judge Donald P. O’Connell of the Circuit Court to the Citizens Committee of the Juvenile Court, where she served until 2001.

She has also been active with various Bar Associations, including the Illinois State Bar Association, Standing Committee on Continuing Legal Education; Juvenile Justice Section; Women and Minority Committee; Committee of Judicial Evaluations, and the Hispanic Lawyers Association of Illinois. She served as an Adjunct Professor at John Marshall Law School.

Ruth is a single mother of a 17-year-old daughter and a 13-year-old son and is very passionate about her service to the community she resides and serves in. Every experience has been to build a foundation for her to be a committed, experienced, qualified, ethical, and impartial Judge in the Circuit Court of Cook County.