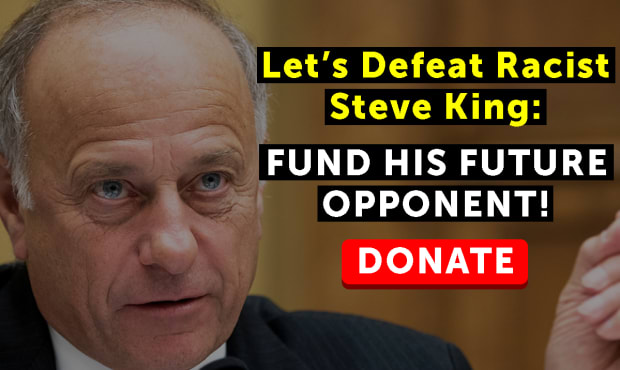 Though Republicans are seemingly just now taking notice – stripping King of his committee seats on Monday after he defended white supremacy – this is not the first time Rep. King has created a controversy with his attacks on racial minorities and other groups. He invented Trumpism and its dangerous, right-wing agenda. From making false claims about undocumented immigrants as early as 2006 to asserting that nonwhite groups haven’t contributed as much to civilization as whites in 2016 and so much more, Congressman Steve King is an embarrassment to the state of Iowa.

It’s not enough to call for him to resign. If he runs for reelection in 2020 (we’d wouldn’t be surprised if he did!), we have to be prepared to get him out of office for good – there’s no time to waste.

King came within four points of losing his seat to a Democrat last year. With your help, we can defeat him in 2020.

First, we need funding to build capacity so that our ground game in 2020 is second-to-none. Then, we need to ensure his Democratic challenger has the funds they need to run an effective campaign and send Steve packing.

Help us win back Iowa from Steve King—because racists don't get to win.

Your contribution will be split between the eventual Democratic nominee for Iowa’s 4th Congressional District and the Iowa Democratic Party’s grassroots efforts to prepare for 2020.