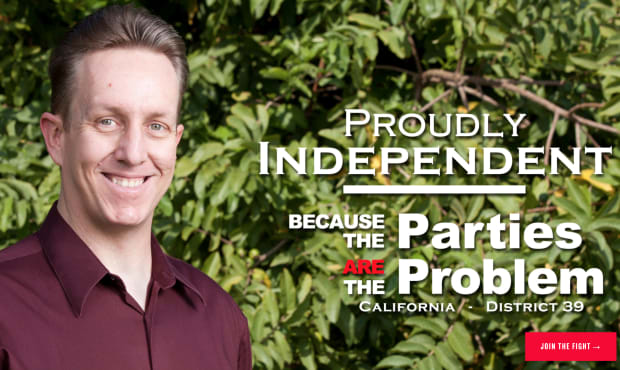 Independent Berniecrat Fighting To Make Democracy Great Again!
I’m Steve Cox, and I’m running for Congress as an independent in California’s 39th Congressional District because I believe in the power of the people, but I don’t believe our two major parties have any idea how powerful we can be. While regular people like us struggle just to get by, our politicians do everything they can to keep us fighting amongst ourselves while they serve the interests of their parties and their big-money, corporate donors. We’ve been left behind by both parties for decades, and I believe there’s only one way to change it: Vote them both out.

I know that people sometimes believe voting for an Independent is a “wasted vote” (I wholeheartedly disagree), but voting for partisan candidates who go back on their promises isn’t just a wasted vote, it nullifies our votes altogether. And I have committed to continue running until I win, so the support I garner will not be wasted. I know the message I deliver is popular, but unfortunately it takes money to get that message in front of enough people.

As I canvassed during the last election cycle, it almost always went the same way:
I’d knock on a door, the person would answer, and I’d introduce myself. “I’m Steve Cox and I’m running for congress here."
They’d cross their arms and say, “Which party?”
“I’m an independent.”
They’d uncross their arms and say, “Oh, okay, so where do you stand on...”

That’s the unique power of independent candidates: I can talk to anyone from anywhere on the ideological spectrum, and that’s something we *have to* do if we’re going to fix this dysfunctional government of ours. Democrats would’ve slammed the door in my face if I said I was a Republican, and vice versa. That’s the nature of politics today. But while both parties are busy building walls to divide the populace, independents can be bridges. We bring people of seemingly disparate beliefs together.

There was a day during the last election cycle, in the neighborhood where I grew up, when I spoke to a man who was a Trump supporter (Trump sticker on his pickup truck, American flag on a vertical pole in the yard) and got him to put my sign in his yard immediately after I had just done the same with a man, almost directly across the street, who was a Democrat who came to the US as an illegal immigrant in the 1980s and got amnesty under Ronald Reagan. I stood in the middle of the street afterward (it’s not a busy street) and all I could think was, “If you two would just *talk* to each other...”

But that’s not what the parties want. The parties don't stay in power because they do such a good job taking care of our nation and its people. They stay in power because they’ve convinced the voters that there’s no third option. I believe the only actual way to fix our dysfunctional government is to start replacing both parties with independents until such a point (if it ever comes) that the parties start actually working for *us* again.

To wrap this thing up, it’s true that it’s difficult for an Independent to get things done in a congress that’s dominated by these two corrupt parties, but what are they actually getting done now? Nothing. Here’s one thing that will definitely get done when I get into congress: I will introduce a bill to base congressional pay on the median wage in their district (for the House) and state (for the Senate), which can bring accountability back to our elected “representatives”. This way, they won’t be able to vote themselves raises anymore; they won’t get a raise until we do. This bill will likely fail, at least at first, *but*...

As part of that, I’ll be donating all of *my* pay above the median household wage in California’s 39th Congressional District to public-school teachers in the district to reimburse them for supplies that they have to pay for out of their own pockets. The median household wage in the 39th District is about $80,000, and starting pay for Congress is $174,000, so I’ll be donating $94,000 per year to teachers in CD39. I can do this on my own without approval from anybody.

This is my commitment to my community, my country, and my world. How big of a commitment can *you* make? Because we must fix this government of ours. If not us, then who? And if not now, then when?